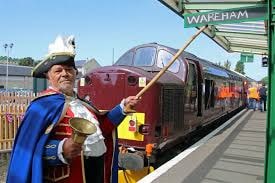 There was a packed agenda for new Club President Ro Clark’s first meeting.

Not only did we have Chris and Hannah from Swanage Gymnastics Club but Swanage Town Crier Andrew Fleming was also present, and two Paul Harris Fellowships were awarded.

To start with, President Ro was delighted to present Paul Harris 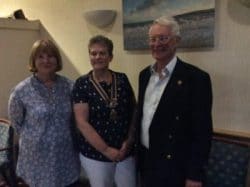 Fellowships to Paddy Rideal and David Dean for many years of support and endeavour to Rotary and our club. They were extremely grateful to receive the recognition.

Chris and Hannah addressed the meeting next, explaining how they had established the gymnastics club at Swanage School from scratch without having any idea whether it would be a success or not. However, when over 100 people signed up before they even opened they knew that they had identified a much needed gap in the Swanage area. Previously the nearest similar club was either Wareham or Lychett. They now run several classes a week on Tuesdays, Thursdays and Fridays, including classes for adults, and have a waiting list of around 120! 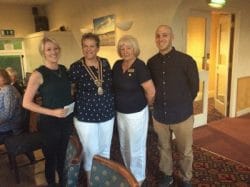 They also showed a short video to demonstrate what happens at the club. Swanage Rotary were delighted to present them for a cheque for £1000 which will go towards a new trampette and other equipment. Rotarian Steve Parsons offered a vote of thanks on behalf of the Club for telling and showing us the fruits of their efforts.

Lastly but by no means least, Andrew Fleming addressed the meeting. He explained the history of the role of the Town Crier, which actually dates back to Roman times. More recently, in the 17 and 18 hundreds, the Town Crier would disseminate information to the general public, most if whom couldn’t read, especially when taxes needed to be raised to pay for wars! He held a unique position, however, as the role was protected by the Monarch and it was illegal to interrupt or otherwise interfere with the messages that were being cried.

These days the role is largely ceremonial but there are competitions held up and down the country for town criers to demonstrate their prowess. Andrew has won the South of England competition three years in a row and has finished second and third twice in the National competition, so perhaps this year will be his year. The role is unpaid but is for life so Andrew is looking forward to continuing to do it for many years to come. On behalf of the Club Deirdre Selwyn offered a vote of thanks for a most informative and entertaining address.