Club members gathered with organisations who have been supported by Swanage Rotary, and organisations that have supported the club’s activities, on 13th June to commemorate another successful year of fundraising, with almost £21,000 raised up to the end of April 2018.

Over 65 people, including Swanage Town Mayor Mike Bonfield, crammed in to Swanage Conservative Club to enjoy a sumptuous buffet laid on by Rotarians Sue Whitton and David Pike.

This was followed by an on-screen presentation highlighting the events and activities of the year, including the Summer Fête, Santa Sleigh, Christmas Market, Young Musician and Young Chef competitions, Swanage Walks and the Purbeck Pirate Festival amongst many others. Even the ‘Beast from the East’ got a mention!

While a significant amount of our fundraising has already been distributed, we were able to present a number of cheques on the night amounting to over £4,000 to Swanage Foodbank, Barry Audley on behalf of Dorset and Somerset Air Ambulance, Swanage & Purbeck Development Trust aka The Centre and Admiral Nurses. 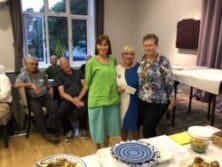 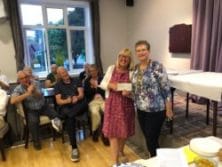 We were also proud to be able to award a Paul Harris Fellowship to Kim Gallagher for her sterling efforts over many years to The Centre in particular and the youth of Swanage in general.

During the evening, Rotarian Hubert Pierce was presented with a certificate marking 50 years as a Rotarian.

The night concluded with a networking opportunity for those present to find out more about the various activities that Rotary is involved in, amongst which are Foundation, Community and International.