It’s that time of year when we start to look at our targets and objectives for the new Rotary year, which begins on July 1st.

The group holds an ‘Assembly’ every June to identify the events that the CIO plans to run and the areas that it would like to support, assuming we are able to raise the funds to do so, in 2022/23. These include:

We look forward to seeing our wonderful local community at many of the events and sincerely hope that we will be able to raise the funds required to fulfil these plans.

Anyone who would like to know more about the group, what we do and how they can get involved can contact us via email here.

With deep regret we are very sad to announce that the Swanage Rotary Fête, planned for Thursday 6th August, has had to be cancelled.

We have been waiting as long as possible for clarification on the feasibility of running the event but it is clear from the Government advice on social distancing this week (11th May) that public activities will not be able to proceed in a format that would allow us to put this event on. In addition, local Government very strongly advise that visitors should not come to our area during the pandemic.

But we will be back, bigger and better in 2021!! The date for your diaries is Thursday 12th August 2021 and we look forward to seeing you all there.
Stay Alert, Control the Virus, Save Lives. 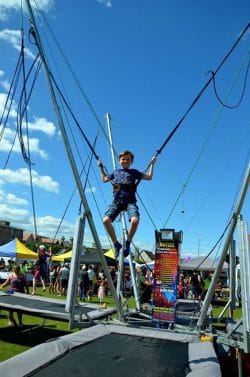 After all the recent poor weather, Swanage Rotarians approached this week’s Summer Fête and Craft Fair with some trepidation, wondering even if the event would be able to go ahead at all.

We needn’t have worried. Although Sandpit Field was a little muddy to start with, the advance 7am party of Rotarians worked hard to get everyone on site to prepare for the opening of the event. They needed to chalk the lay out again as it had washed away (!) but after running around and unpacking endless boxes the site was ready for 10.30 and it looked great with all the stalls ready to go.

The Craft tent had many people manning their own stalls, selling their wares and what a pleasure it was to see many talented people. There were lots of entertainers ready to perform to the crowds young and old and they stopped people in their tracks to watch and listen. 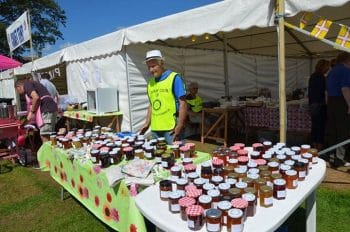 As President I had the pleasure of opening the Fête, and gave thanks to a huge team of people that worked so hard to make the day possible. Particular grateful thanks go to our visitors, because without them it would not be a success at all and there would be no funds available to be able to do what Rotary does best – supporting the local community as well as International projects. Many thanks also go to our Business partners and local people who very generously supported the raffle by donating incredible prizes.

I tried very hard to go around and thank everyone in person for their contribution in making the day a great one. I also talked to lots of visitors and locals who come back year after year as they love the family feel that the event has, not to mention the wonderful food that is available too. 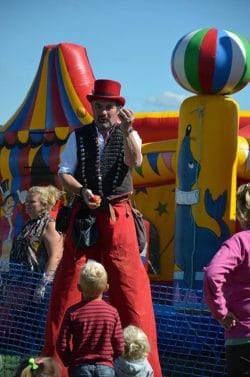 I drew the raffle (winning ticket numbers here) and awarded prizes for naming the Dalmatian, which will be called Buttons. There were also sports trophies for three age groups of football keepy-uppys. All the awardees were really pleased with their prizes.

At the end the clear up began, and again Rotarians put their shoulders to the wheel and worked hard in packing lots of heavy kit on to big tractors. In no time at all the field was once again cleared

It was a long and tiring day, but so worthwhile to see lots of smiling happy faces and to hear laughter and people clutching their precious purchases from the many stalls. Special thanks must go to the Fête Committee and also to the Treasurer and his trusty team, who will be counting out the money and paying the bills. We will know the final figure raised at some point in the near future. Then we can get down to the business of sharing it all out. That is what being a Rotarian is all about: the work and then the joy of helping others. It warms my heart.