Every year we hold our Presentation Night to recognise those people and organisations who have helped us and supported our activities, and who we have supported through donations and other forms of assistance.

Delayed this year due to COVID-19 restrictions that were in place in June, we were eventually able to hold our event on 29th September in The Mowlem Theatre with Rotarians Past and Present and representatives from many of those organisations and good causes.

Also present was our Assistant District Governor Roz Scammell, who is also a Past President of Bournemouth Rotary.

President Deirdre opened proceedings with an overview of the year to the end of June 2021 accompanied by a slide show highlighting the activities and events that we had been able to run. Each of the club’s committee chairs then gave a brief overview of the areas that they were responsible for and the wide range of activities that have taken place despite the restrictions that we have all been under.

It was then time to present prestigious Paul Harris Fellowships (PHF), the “gold medal” of Rotary, to those individuals who have gone above and beyond in our community. We were delighted to present PHFs to Dave Whitton, for his tireless fundraising over many years and Frank Roberts, who leads the Swanage Army Link group that goes out in all weathers to keep our community litter free.

Following these formalities, a splendid buffet had been put on, allowing those present to chat and network with each other and enjoy the lovely views afforded by the venue. 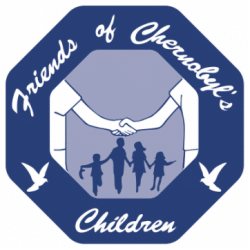 Our speaker this week was our very own Bernard Bettles, who spoke to us about his work with the Chernobyl Children of Belarus.

The children of Belarus were seriously affected by the nuclear cloud that was blown across the country after the Chernobyl nuclear reactor exploded in the 1980s. In the 1990s Bernard helped to co-ordinate visits from the children to the UK and he explained, in a touching and light-hearted way in equal measure, how the children benefitted from enjoying clear air and uncontaminated food for a few weeks and also how the people of our area got to know some of the children so well over several years.

Other work that Bernard got involved with included trying to provide better conditions for the children once they returned home, including clothing them with end of line stock from Animal (donated free of charge) and in particular The Seed Project – providing seeds so that they could grow their own produce. The seeds and equipment were all shipped out from the UK to one of the schools in Marina Gorka so that the local children could start to grow vegetables in uncontaminated soil that would not harm them further. Moreover, any surplus that they grew was sold to local people thus benefitting the wider community.

Another project that Bernard got involved with was in helping to provide furniture for another school in Minsk. The money was raised in the UK through local schools, churches, Swanage Rotary and Swanage Lions, but the furniture was bought locally in Belarus to benefit the local economy as well as the school.

On behalf of the club Rotarian Mick Beck proposed a vote of thanks to Bernard, not only for his presentation but for his years of service to Swanage Rotary on what is his farewell meeting. Happy ‘Retirement’ Bernard! 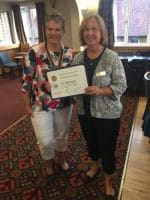 Earlier in the evening, President Ro Clark was delighted to present a Paul Harris Fellowship to Deirdre Selwyn for her many years of work with numerous charities and causes and her dedication to the health and welfare of the community. Deirdre was typically modest about her achievements but delighted to have received the honour. 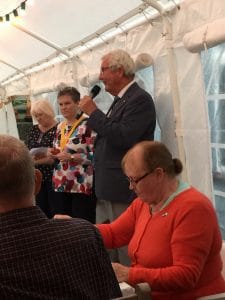 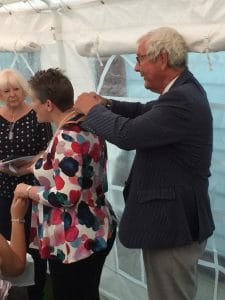 In less than ideal summer weather, Club members, family and friends assembled at the home of Past DGs Dave & Mary Pike to oversee the changing of the guard. Not to be daunted by the wet weather, David had managed to put up a marquee in his garden to ensure that no one got wet during the celebrations. 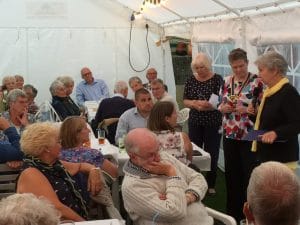 The evening was also the opportunity to present a number of Paul Harris Fellowships to individuals who have gone above and beyond in helping the Club and the local community. President Ro presented the awards to Mike Humpherson, David Huntley, Jenny Huntley and Kathie Stimpson who were all both surprised and delighted to be recognised. 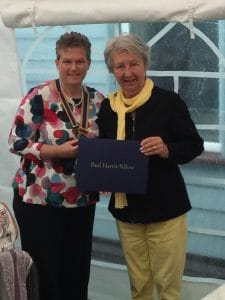 A sumptuous buffet was provided by our usual caterers Bliss Food Co and a ready supply of Pimms was on hand to ensure that everyone was able to toast the start of the new Rotary year.

But there’s no time to lose, as the next Rotary-Supported events are already looming large – the Kingston Country Fair over the weekend of 8th and 9th July and the Summer Fête in Sandpit Field on Thursday 10th August. More details are available under ‘Latest News’.