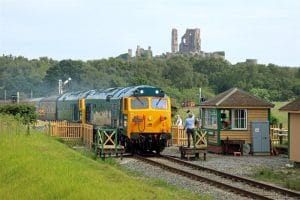 Our speaker at this week’s meeting was Dr Mike Walshaw, an electrical engineer who volunteers as a signalman at the Corfe Castle signal box on the Swanage Railway. Mike came to talk to us about Project Wareham – the project to link Swanage back to the railway network.

Mike has been involved with the project since 2011. It was the Poole to Wool resignalling project that offered the “chance of a lifetime” possibility to recreate the link back to the network but over five million pounds had to be raised to give the project any chance of success. Network Rail did not contribute any money to Project Wareham but did fund the main line upgrades, eventually commissioned in 2014. 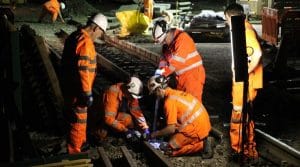 and the erection of a flat pack cabin at Norden Gates. Contractors were employed to undertake some of the works with volunteers assisting where they could. Mike himself was responsible for the design and installation of part of the signalling system – the token system, a system used on single track lines which dates back over 100 years to the early days of the railway.

Other challenges that had to be overcome were strengthening parts of the trackway itself (the embankments), replacing old and worn rail and creating a road/rail interchange and a new level crossing at Norden. 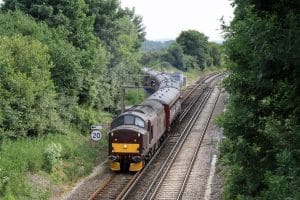 The talk was a fascinating insight into the efforts made to successfully enable the line to be reopened back to the main line at Wareham earlier this year, and Rotarian David Huntley thanked Dr Mike for coming to tell us all about it.