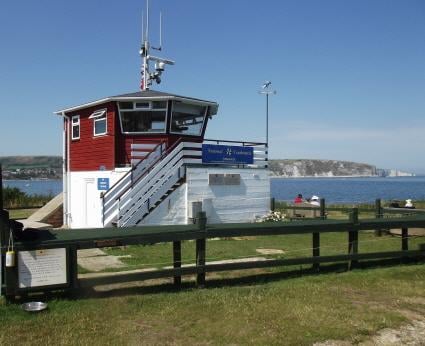 We were delighted to welcome Ross Martin from National Coastwatch Institution to this week’s meeting, who works at the the Peveril Point watch station.

National Coastwatch, whose strapline is “Eyes Along The Coast” are responsible for watching over our coastline, looking out for those in or on the water should they get into any trouble and trying to preserve life.

It started in 1994 at Bass Point on the Lizard in Cornwall. The lack of any coastguard in the area, resulting in a tragedy where two people died, highlighted the need for the service. There are now more than 50 around the British coastline, in both England and Wales although not in Scotland yet, and the number is increasing.

The service is there to prioritise vulnerable people, and Ross highlighted the dangers of the wide variety of inflatables that people bring to the sea which cause the service to spring into action. Jet Skis, Kite Surfers and sailboards also result in many call outs.

Ross showed us pictures of the various buildings that are used for the service, mainly former coastguard stations, and some of the items that they have found washed up on the beaches around the country. The service is so important these days because of the lack of other services that used to exist actually on the coast such as lighthouses and coastguards. The service is recognised formally as part of the search and rescue service. Emergency response is undertaken by all parts of the search and rescue services.

They provide training to their volunteer watchkeepers in areas such as spotting, plotting and reporting as well as watching experienced watchkeepers at work. Incidents are usually reporting via the 999 service but they do now have their own radio channel, channel 65, which has hugely helped and the service is trying to get the word out to all users of the coasts that this is available.

NCI costs thousands of pounds to keep going but is not funded and relies entirely on public donations to keep itself going. They fundraise at many events around the area. More details about their activities and how people can help are available on their website. The service has been granted royal patronage by Princess Anne and has won the Queen’s Award for Voluntary Services.

On behalf of the club, Rotarian John Thraves thanked Ross for a most informative and enlightening presentation.